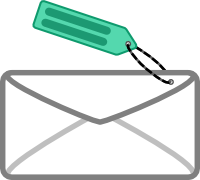 Address extension is one of the features known from GMail but you’ll often never think about configuring for your own mail server. I did not think about it for quite some time as I thought it might be complicated to set up this feature, but I was surprised to see how easy it using postfix.

If your email address was user1@example.com you could add address extensions like this.

Postfix will look for the configured delimiter and split the local-part of the email address. When the first part matches a user, postfix delivers the email to this user without further checking the address extension. The address extension you are using does not need to be known by the server and can be anything. The same technique is used by GMail which also uses “+” as its delimiter. This feature is called “address alias” by GMail.

With your own mail server, you can change the delimiter to whatever symbol you want. The only limitation you have are the allowed characters for an email address. These are specified by the RFC 5322 in section 3.2.3 and as well described on Wikipedia. To configure the delimiter for the address extension, add the following setting to the “/etc/postfix/main.cf” configuration file.

This entry was posted in Mailserver and tagged address extension, postfix. Bookmark the permalink.