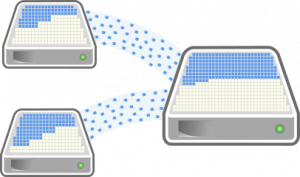 If a partition was added as physical volume, growing the block device is difficult. If the server is a VM, growing a disk is not a big deal. Increasing the logical volume by creating another partition on the disk and adding that to the LVM can get very messy at some point.

What is the solution?

Assuming a VM that already has three disks: one being the operating system disk, and the other two in the LVM containing a partition as a data volume. Now the data volume needs to be increased again but the partition on the data disks prevents this. To get out of this mess, create in the hypervisor another disk with at least the size of the second and third disk together and add it to the VM.

As soon as the disk appears on the system, it can be added without a partition to the LVM using the following command.

This will add the disk as a “physical volume” without limitations imposed by partitions. This disk will be able to grow when its size is increased in the hypervisor.

How to cleanup the mess?

To move all used extents from the physical volumes to /dev/vdd, pvmove(8) is used. This command allows to move the allocated physical extents (PEs)

Listing the physical volumes now, shows that all extends have been moved to /dev/vdd.

The process of moving the extents can be interrupted at any time using the following command in a separate terminal.

The disks can now be removed or used for something else, as they are not part of the lvm configuration any longer.