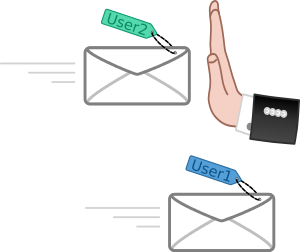 With postfix, there is the possibility to use the “check_sender_access” to set individual actions per sender address. For the list of recipients and their action, a mapping needs to be created in the form of a hash database file. First you need to create a text file. The name here is chosen based on the name of the setting but can also be named differently.

Inside the file, the senders and actions are configured. The mapping table will match the “address pattern” to an “action”. The address pattern can be a full email address like user@example.com, a domain like “example.com” or even just the user part like “user@”. The second column in the file is the action.

The action can simply be REJECT or an SMTP error code followed by the text delivered back with the error code. More details about the possible actions can be found in the postfix man page access(5) under the section “REJECT ACTIONS”.

With the access table in place, the sender check needs to be enabled in the smtpd part of postfix. This is done in the /etc/postfix/main.cf configuration file.

With the reload option, postfix will not completely restart but re-read the configuration and the related tables. This needs to be done every time the sender_access file is changed and the database file is generated, to activate the changes.

How do the result look?

Depending on the setup of the sending server the result might look slightly different. What most have in common is that they show a failure notice containing the returned error code and error message.

The corresponding log line from the receiving/rejecting mailserver looks like the following and shows the exact same error message as the failure notice.

With the simple “REJECT” action in the table, the following error will be reported. It equals to the action “554 Access denied”.