When using my iPhone 6 I have all of the wireless technologies enabled. Bluetooth for the hands-free in the car, Wifi to connect to the network at home and, of course, the mobile data network 3G/LTE. I have noticed that most smartphone users do not play around with there settings to enable or disable the different technologies when they don’t need them. The only situation when I think about switching some of these off is when the battery runs empty, and of course, this always happens when we are not at home or near a charger.

What if we could just charge the phone on the go? Without carrying around a separate device and cables?

There are solutions to charge a phone on the go. So called “power banks” provide the possibility to charge any USB chargeable device. Power banks provide a USB port where the USB charging cable can be connected. I used to have one but when I needed it, it was either empty or I had forgotten it or the charging cable at home. The second solution is a battery case. Battery cases are protective cases for the smartphone with an integrated battery to recharge the phone.

One of these battery cases is from a company called 1byone. They offer battery cases for different phones. I got the “1byone iPhone 6/6s Battery Charger Case” and want to share my experience with it. 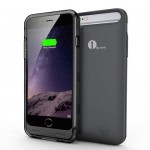 The “1byone iPhone 6/6s Battery Charger Case” is available via Amazon UK and Amazon US.

The charging time of the iPhone is approx. 2 hours when charging from an Apple charger and the battery charger case charges the phone in the same time. When an external charger is connected, the battery case is charged together with the iPhone 6. While both are charged via the micro USB connector, the phone has charging priority.

The battery charger case comes together with a micro USB cable and a headphone extension cable. The case consists of two pieces; the battery back and the frame. The frame is easy to remove but holds the iPhone tightly and safe. With the battery case come 2 different frames, one transparent and one black. 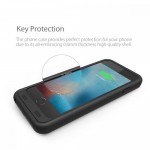 What are the important features of a case? The battery charger case protects the phone’s surrounding by the frame holding it in the case. The frame is also slightly higher then the phone’s screen. This protects the touch-screen from scratches when placed on a table screen down.

Power and volume buttons are also protected but still accessible though the frame of the battery charger case. The mute switch is cut out of the frame so it can be reached but is not too big to be switched accidentally in your pocket.

While the lightning cable made it always a bit difficult for me to find a charging cable when on the go or with friends. The micro USB on the other hand is widely used and easy to find – thanks to efforts of the European Union in creating a standard for mobile device charging cables.

Speaker and microphone openings are covered by the battery charger case which is the reason for the small holes in the case underneath the phones Home button. As a side effect of the speaker being redirected, the sound of the iPhone is now directed towards the user of the iPhone instead of downwards as without the case. I personally like this behaviour as the direct sound lets the sound appear louder and more clear.

The downside of this is the covered headphone jack. The cover at this point is so wide that a headphone plug which is too thick or not straight does not fit in. The iPhone’s original headphone just fits in. The plug completely goes into the battery charger case leaving only the cable looking out. To unplug the headphones you have to pull on the cable which is not good for the cable itself. That and third-party headphones that do not fit in, are apparently the reasons why 1byone added a headphone extension cable with an unusually long plug to be able to unplug it without pulling on the cable.

After inserting the iPhone6 into the case, I noticed first the weight. The iPhone 6 with the case is twice as heavy as without it. You immediately notice the additional weight even when the case alone does not feel heavy at all.

Second noticeable thing is the the size. On the back the battery charger case is thicker as this is where the additional battery is located. On top of this, the case adds size as well at the bottom of the phone right next to the home button, loudspeaker and microphone.

While using the iPhone in the case for the first time, the height difference at the bottom of the phone is irritating at first. Especially when the fingerprint sensor is used, the slight height difference between the iPhone’s screen and the case feels odd. Even though it was irritating at first, I got used to it quite quickly. I found it quite useful to feel where the iPhone ends to know where the Home button is located without looking at it.

While carrying the battery charger case around on my iPhone, it had a bad time in my pocket together with another phone. The second phone scratched the back of the 1byone iPhone 6/6s Battery Charger Case on a daily basis. Thanks to the soft finish of the battery charger case, it is hard to see them, though if you look closely enough of course the scratches can still be found.

Charging the iPhone from the battery case shows an indication on the back of the case using 4 LED’s. I liked very much that this indication is not on and/or flashing all the time. While charging, the battery level of the case can be checked any time by quickly pressing the charging button.

Another nice thing is the Micro USB used to charge and sync the iPhone through the 1byone iPhone 6/6s Battery Charger Case. The micro USB has become a standard for most mobile devices. When travelling I now only need one USB cable to charge the iPhone through the case, my digital camera and all the other devices. With most friends having at least some mobile device with Micro USB, it is alsp much easier to find someone to lend you a cable for an hour or two.

The charging cable delivered with the battery case is quite short which let me choose another micro USB cable I had lying around. Without claiming to know the reason for it, I noticed that the battery case did make a very high-pitched noise. At first I did not give it any attention. Only after I noticed that the phone is charging extremely slowly (from 1% to 8% after an hour) I changed the USB cable and the noise was gone, the iPhone was charged in about 2 hours and the battery case was charged up as well in about 2 hours. 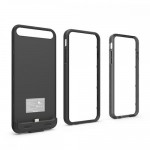 This entry was posted in Review and tagged iPhone, power bank. Bookmark the permalink.