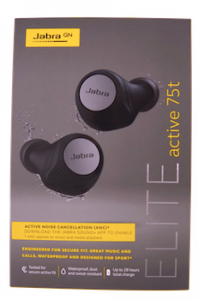 Back in the early 2000’s Bluetooth was the huge new thing to replace infrared as the wireless connection protocol. At that time one of the first wireless headsets I bought was a Jabra BT200. It was a huge, heavy device resembling a hearing aid. Despite its weight, the headset was well balanced and worked very well. So recently I was intrigued to see Jabra is still around and offers earbuds. 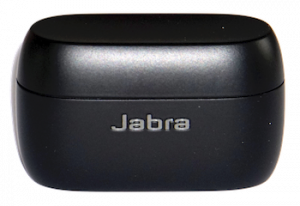 The Jabra Elite Active 75t come with a nice compact case. Jabra did a nice job keeping the case flat so it fits into the pocket without bulging them too much. The hinge of the case feels very solid and the earbuds are held in the case securely by magnets. Even if the case is held upside down, the magnets hold the earbuds securely inside the case.

The case has a USB-C port for charging and no buttons. The case holds 3 additional charges for the earbuds in just 35 g (1.23 oz). In contrast to other earbud cases, the Jabra Elite Active 75t case does not have any buttons. To pair the earbuds, the buttons on the earbuds are used. 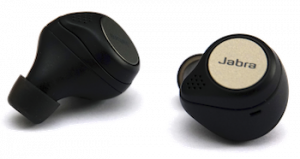 Each Jabra Elite Active 75t earbud weighs 5.5g (0.19 oz). Each earbud is compact and sits nearly completely inside the ear. The silicone tips sit securely in the ear canal while the shape of the earbud secures it safely in the ear.

Each earbud has a mechanical push-button which is easy enough to press without pushing the earbud into the ear too much but still provides good tactile feedback. The mechanical button avoids accidental triggering, like you might get with a touch-sensitive button.

Compared to many other earbuds, the case does not have a pairing button. Instead the pairing mode is triggered by pressing the button on both earbuds at the same time and holding them for 3 seconds.

The Jabra Elite Active 75t earbud are IP57 rated. This even allows the earbuds to be a few centimetres submerged in water.

The Jabra Elite Active 75t have a total of 4 microphones, which they use to provide active noise cancellation (ANC) and a hear-through mode. Even without ANC, the earbuds provide a strong noise isolation which removes a lot of noise already without the need to enable ANC. On the other hand, the strong noise isolation makes it hard to follow a conversion without activating the hear through mode.

With more and more devices, it is nice to see the Jabra Elite Active 75t support multi-connect. It allows two devices to be connected at the same time to the earbuds. Switching between the two devices is done automatically based on which device is sending audio to the earbuds.

In regards to flexibility and controls, the Jabra Elite Active 75t are very flexible and allow configuration using the “Jabra Sound+” smartphone app. Button controls can be configured for different situations like media playback and phone calls. Each earbud can be configured separately with single / double and triple press actions.

The Jabra Sound+ app is available for Android and iOS. Surprisingly every single-press, double-press and triple-press action can be configured individually for the left and right earbud for the different situations. The possible actions include the following.

For call control the following actions are also configurable.

The only non-configurable action is the volume-up / volume-down function. These actions are fixed to the long press of the left and right buttons.

Active Noise Cancellation (ANC) and HearThrough can be adjusted in strength as well as the Sidetone during phone calls.

Overall it is impressive to see a companion app to offer this flexibility in configuring so many aspects of the earbuds.

The result is a case that does not charge the earbuds as the magnets in the adapter interfere with the case. It seems very strange that a little magnet at the USB-C charging port causes the earbuds to remain uncharged even when placed in the case for hours.

Jabra suggested that the earbuds might have a defect, sadly I could not verify this during my test.

When the earbuds switch between two connected devices, lose connection or connect to a device, the ANC or HearThrough mode switches off for a short time. This situation, combined with the unsynchronized switching of modes, makes this doubly annoying.

The auto pause function is supposed to switch off media playback when the earbuds are removed from the ear. Sadly, my experience with this went like the following.

No HearThrough in mono mode

During phone calls, the HearThrough mode is disabled. As soon as a call is accepted, no matter which mode is active, it is automatically disabled. This could cause important sounds to be missed during a call on the street. Not to mention having a call in mono mode with the strong passive noise isolation on the right side only.

The Jabra Elite Active 75t deliver on the promise of small light earbuds with good battery life and secure fit. I never had any issue with the earbuds falling our of my ears or them feeling loose.

Configuring the controls and features of the earbuds offer a flexibility that leaves no wish unfulfilled.

With the HearThrough, the surrounding sounds are not as clear and natural as you might expect. That means, I always preferred taking the earbuds out in a conversation or in situation where listening to my surroundings was important.

The most irritating anomaly is the unsynchronised switching of modes. It caused a strange feeling in my ears during the switching for a second or two.

The above review of the Jabra Elite Active 75t represents my personal experience. Jabra did not influence or pay for this review in any form.

This entry was posted in Review and tagged Earbuds, Jabra. Bookmark the permalink.