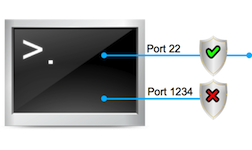 Since version 4 of CentOS, SELinux is providing an additional layer of security to the Linux distribution. CentOS describes it like this: “Security-Enhanced Linux (SELinux) is a mandatory access control (MAC) security mechanism implemented in the kernel.” In other words, it controls with rules what a user or process is allowed to do.

In my experience, keeping SSH on the default port 22 is a bad idea, as you will notice a lot of login attempts shortly after your server goes online. One of the actions (of course not the only one) to secure the server is to just change this port.

With SELinux in combination with sshd, changing the port, or even listening on 2 ports, is not as easy as just changing the sshd configuration file.

First we will need to configure sshd to listen on the new port. As precaution, I’d suggest changing the port in a two step process: first adding the new port to the sshd configuration as a second listening port and in the second step, after verifying that the new port works, removing the old/standard port from the configuration or blocking it via the firewall. For this article lets assume the new port number will be 1234. This is just a number I made up.

You need to check first that the port number you choose will not be used from any other service you will run on your server. For example, choosing port 80 would be possible but not wise if you want to run a web-server as well. So it’s best to choose a port that is not commonly used for anything else.

Make sure the following lines are in the sshd configuration and none of them is commented out with a leading “#”. In CentOS the ssh server configuration can be found at /etc/ssh/sshd_config.

From sshd’s perspective that should be enough to make it listen on both ports. If you have configured a firewall on your server, make sure the firewall is not blocking the new port.

Now we can restart sshd with the following command:

After this you will see that the restart was successful. With the command “lsof -i -P -n” you can check all listening ports. You should see that sshd is not listening on the new port 1234 but still on 22.

A quick look into the logfile will reveal the following messages:

This is SELinux in action. SSH is not supposed to listen on port 1234 as far as the SELinux rules are concerned. So we need to modify the SELinux configuration to allow sshd to listen on our new port 1234. To do this, we first need to check what ports sshd is allowed to listen on by executing the following command:

To allow sshd to listen on our new port 1234 we have to add a rule to SELinux. This is done by executing the following command:

Please be patient while this command is running. It can take some time to finish.

If you are running a system without swap you might see an error message like this. I found myself in this situation while using an Amazon AWS EC2 micro instance. As you have to pay for every GB of EBS storage, you don’t want to waste it with a huge swap space.

To solve this, first check that swap space is really not available. To do so execute the following command and make sure the line for “swap” shows just the value 0:

To make sure the owner and permission is correct execute the following:

Now we can enable the swap space by running this command:

Now use this command to add a line to the “/etc/fstab/” file to permanently add this swap space to the server:

After this command has finished we can check the added rule again with the following command:

It shows that sshd is now allowed to listen on both port 22 and 1234. Now we can restart sshd again and the log-files as well as “lsof -i -P -n” should show that sshd is now listening to both ports. Before we remove port 22 from the configuration file, you should test the login with the new port to ensure that everything works correctly:

After successfully logging in to the new port, you can safely remove port 22 from the ssh server configuration file and restart the ssh server, or just block port 22 with the firewall.

This entry was posted in Linux Administration, Security and tagged CentOS, SELinux, SSH. Bookmark the permalink.