DNS at the core of the Internet

DNS might not be the oldest, but is for sure one of the oldest and still very important services building the core of the Internet. The domain name service, or DNS for short, is one of the core services of the internet used every day. It is a highly distributed and hierarchical system. Without the DNS service, name resolution would not be possible. It is essential in translating domain names into IP addresses.

DNS in a nutshell

From the early stages of “the Internet” a translation between host names and IP addresses was necessary as IP addresses were hard to remember and could change over time. Whether it was for the name of a website or the hostname of a mail server, a host-name to address-mapping was required to translate all of those names into IP addresses for all the Internet connected devices to connect to those and many other servers and services.

RFC1034 summarises the state of name resolution before the adoption of DNS like this: “Host name to address mappings were maintained by the Network Information Center (NIC) in a single file (HOSTS.TXT) which was FTPed by all hosts”. With the size of the Internet nowadays this concept of managing name resolution in this way is absolutely unthinkable. Even back then, a better solution was needed. This is where the Domain Name System (DNS) was invented. 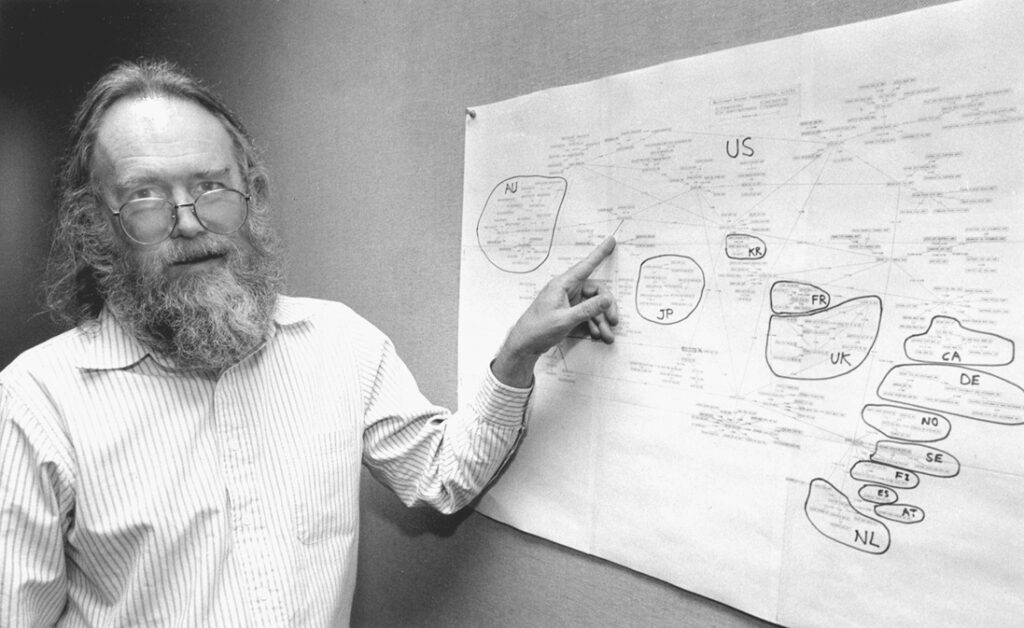 (Jon Postel in 1994, with map of Internet top-level domains. Photo by Irene Fertik, USC News Service. Copyright 1994, USC. Permission granted for free use and distribution, conditioned upon inclusion of the above attribution and copyright notice.)

The DNS system is decentralised, allowing each owner of a so-called zone to manage his DNS entries autonomously. To be able to find information in such a massive decentralised system, a hierarchical structure was introduced. The so called “root zone” often shown as “.” is the top of the hierarchy and the known starting point for lookups.

To continue the example, the well known “www” of “www.tinned-software.net”, is represented as a leaf node in the DNS hierarchy. This “www” leaf node is usually represented by an address resource record (A or AAAA record). Even with the example being one of the most common structures in DNS, the hierarchy does not need to stop there, subdomains are common, as well as names not starting with the well known “www”. For example, “blog.tinned-software.net” uses the “blog” leaf node name. 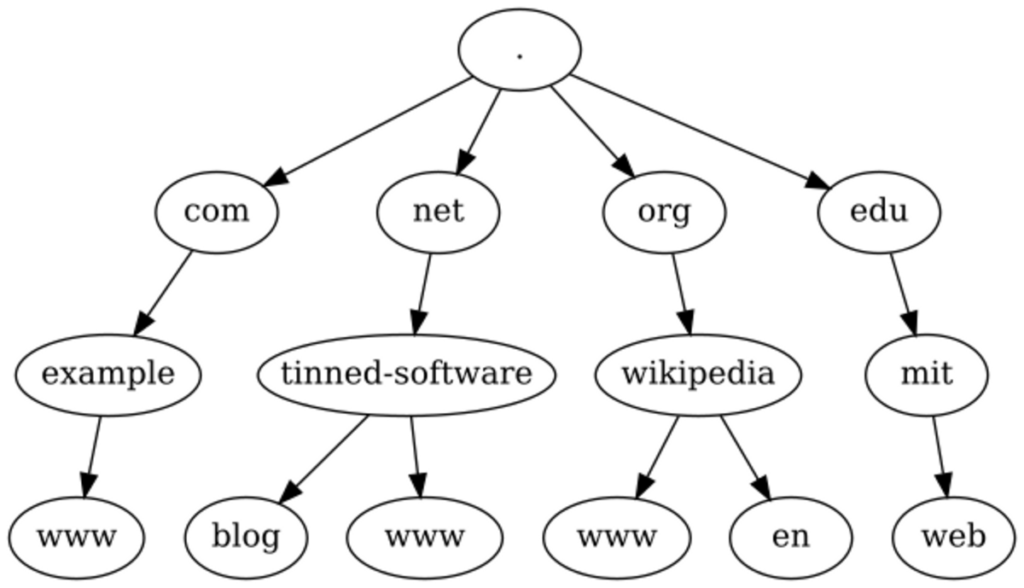 (Example hierarchy of the DNS system.)

Navigating the DNS hierarchy requires a relation between the zones.
The relation is often referred in relative terms like “parent zone” which represents the Zone delegating to the zone in question. For example, from the perspective of the “tinned-software.net” zone, the parent zone is the “net” zone.

As example, one of the authoritative DNS server for the “net” zone, “a.gtld-servers.net.” is delegated from the root zone. As the NS record is an address inside the “net” zone, an additional glue-record needs to be added to the “root” zone to resolve the name “a.gtld-servers.net.” before a resolver can access the DNS server to resolve any domain like “blog.tinned-software.net”. 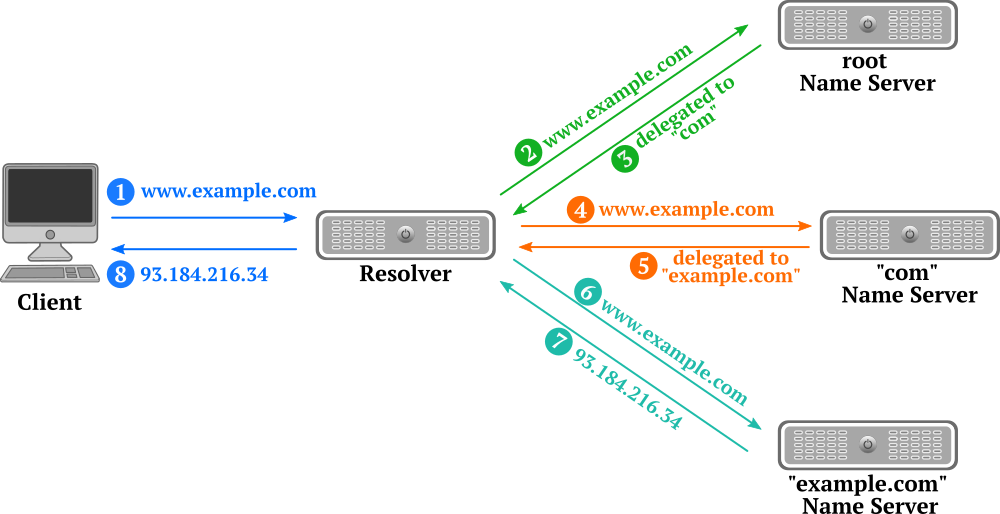 This caching of DNS data is very important and speeds up the resolving process. As with any caching, the cached information needs to be renewed from time to time to ensure the information is not outdated. Those caching times are controlled by the authoritative DNS server with the TTL value on a RR level. Every name server returns with each resource record a Time-To-Live (TTL) indicating its caching time. When the caching time expires, the resolver will discard those from its cache and resolve the necessary information again.

In DNS, records do not have to be unique, with only a few exceptions. The most often used case where multiple nearly identical records are used are the name server (NS) records. Usually a zone lists its name servers as NS records. To ensure high availability, a zone nearly always lists more then just one name server. Lets take the “example.com” zone which, at the time of writing, shows two name servers.

How is a name server chosen to be queried? When a resolver receives an answer like this it needs to choose one of the name servers. The detail of how this works differs slightly depending on the operating system. Often, the name server responding with a resource record set will shuffle the records each time it is queried. A client can then always choose the first. Other clients might choose randomly from the list. In any way, this approach will distribute the load over the returned name servers.

Additionally, a resolver would choose a different record after a timeout if the first chosen one would not respond. This allows for a fallback to ensure a higher availability even with some name servers not being reachable.

The concept of having multiple records with the same name, class and type is also possible with many other record types. Most commonly used with address records, this technique is called Round-Robin.

Every time a DNS name is resolved, the client sends a request to the resolver. There are utilities to send DNS requests like these to inspect the response from the resolver or other name servers. One of these utilities is “dig”.

The dig(1) utility is part of the BIND name server project from Internet Systems Consortium (ISC) and allows you to interact with name servers.

The most simple request for the address of “www.example.com” contains just the “dig” command and the name to be resolved as the only argument.

This simple command will use the system’s configuration to determine the resolver to query. It sends the query for the address record to the resolver and shows the returned result.

The output shows lines starting with a semicolon “;” indicating a comment. Those comments contain a lot of useful details for investigating name server responses. For this simple example, most information in the comments can be ignored, with the exception of the all capital letter section names in the comment lines.

For inspecting the DNS response, the “QUESTION SECTION” shows the request. The “ANSWER SECTION” shows the answer but not as a comment. The answer show, the name field on the left, the TTL as the second field, the  so-called class (“IN”) and the record type “A”. The last field of the answer is the record data. In case of a A record, this is the IP v4 address.

In this particular example, the “ADDITIONAL SECTION” doesn’t only return A records with IP v4 addresses, but also AAAA records for IP v6 address records.

The previous request just showed the request to the resolver and its response. To inspect the hierarchy of zones and their name servers, the option “+trace” can be used. The dig manpage describes it as follows.

When tracing is enabled, dig makes iterative queries to resolve the name being looked up. It will follow referrals from the root servers, showing the answer from each server that was used to resolve the lookup.

At this point when the “+nodnssec” option is added, it hides the very long DNSSEC related records (DNSSEC is a completely different topic for another time. For now, hiding those records makes it easier to see and read the result of the dig command).

As the example above shows, the output of “dig” changes a lot with the “+trace” option. The output is structured into blocks representing the different levels of the DNS hierarchy.

In the same way, the third block shows the name servers for the “example.com” which where retrieved from the “g.gtld-servers.net” in the example.

Finally, the 4th block shows the result queried for and the name server it was retrieved from.

This entry was posted in DNS and tagged dig, DNS. Bookmark the permalink.