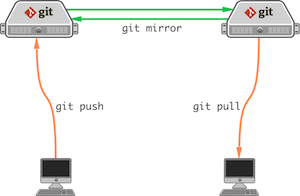 If you have gitosis and a number of repositories installed on a server and need to move them to another server, or you want to build a cluster to have more then one server serving the repositories, this post will describe how I solved this for my gitosis repositories.

For this article I assume that you already have a working gitosis installation as described in Setup gitosis to manage git repositories. Our existing gitosis server will be called the master-server.

The cluster setup described in this article is not necessarily based on gitosis. You can deploy this setup as well for any other git repositories you have. To cluster a git repository, only standard git functionality is used. Having gitosis or a similar repository management tool just makes it easier.

The following setup will describe an active-active cluster for git repositories. As there is no master-slave relationship involved, it is possible to push or pull to or from any of the git servers in the cluster.

Whenever you change the configuration of the git repositories, you need to push the changes to both repositories. For convenience I created a small script inside the gitosis-admin repository, I called “git-push-all”, that pushes my changes automatically to all remote repositories.

I also created a script inside the gitosis-admin repository, called “git-pull-all”, to automatically pull the latest changes from all the remote repositories.

As we need the repository servers to each push their changes to the other one, we need to setup the access between them. With gitosis adding access rights is quite easy. First we need to create an ssh-key for the “git” user gitosis is running as for both servers.

During the setup gitosis to manage git repositories the created user did not get a password to login with. That means to create the key, we need to login to the server as root and access the git user from there with “su – git”, as root change user does not require a password. From there you can create the ssh-key with the following command.

This needs to be done on both servers. When this is done you have 2 files which might have names like this.

The changes can now be staged and committed to the local repository. You can use the created script “git-push-all” afterwards to easily push the changes to all remote repository locations.

The new mirror-server does not yet contain any repositories other then the gitosis-admin repository. With the next step we will mirror the repository from the master server to the mirror server.

As the ssh-keys are setup, connect to the mirror-server, change to the git user and execute the following command to mirror the repository. The first command will get you into the repository directory of the git user.

This will clone the bare repository to the mirror-server. Now you have a copy of the repository from the master-server.

The mirror server now has a copy of the repository as well as the remote address stored in the mirrored repository. You can check the remote URL with “git remote -v”.

On the other hand the master-server does not yet know about its mirror. To be able to push the masters changes to the mirror, the master needs to know the remote URL of the mirror-server. To configure it, connect to the master-server and change to the user “git”. Inside the repository directory run the following command to configure the remote URL. The third command will then test the URL to confirm that the authentication and the URL is correct.

Create a script named “post-receive” with the following content. This script will be the hook that is triggered on every push to the repository.

The post-receive hook will be triggered every time content is pushed to the repository. This script should be copied to the “hooks” directory of the repository you want to mirror. This should be done on both the master-server’s and the mirror-server’s repositories to be able to mirror both ways.

To be executed, this script file needs to be executable by the git user when new updates are pushed to the repository. With the following commands, the files are marked executable and the owner is changed to the git user.

With the hook in place, the push output will show additional lines like those in the example below. As you can see the repository is mirrored from the master-server to the mirror-server. The mirror-server tries to push the changes back to the master server but this is up to date and therefore no update is performed. Without performing an update, the hook does not get called again on the master-server, so it does not create a loop.

Now whenever something is pushed to one of the servers (master or mirror), the hook gets triggered and will push the changes on to the other server. The procedure of the mirroring to the other server can be seen as well in the sample output above.