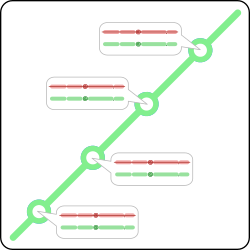 In git repositories, commit messages contain a person’s email address as an identifier for the user. If the email address used to commit is wrong, you might not want it to be shown in the git repository anymore. In general git is very good in keeping a history of changes and information but not as comfortable when it comes to changing history.

Git’s strength is to keep track of changes in the history but it still provides utilities to rewrite history. Those utilities provide a lot of functionality to rewrite / modify the repositories history.

When reaching deep into the repository’s history like described here, starting from a clean state reduces the risk of something going wrong. With this in mind, make sure to start with a clean repository.

Rewriting the history is done with “git filter-branch” by walking through the complete history. For each commit, filters are applied after which the changes are re-committed. The different filters allow modifying different parts of the commit.

The following uses “git filter-branch” to filter the history. Instead of manipulating the files to be recommitted like explained in Remove files from git history, this command uses the “–env-filter” to alter the environment in which the re-committing statement takes place.

As this check is a relatively complex script to place in a one line command, it would be easiest at this point to create a script for it. The following is an example script which allows you to provide the old and new values as arguments to it.

“git filter-branch” uses the additional “–tag-name-filter” to take care about tags referencing commits. The last option “–all” defines all refs to be processed. The “–all” needs to be separated from the filter-branch options by “–“. The script is then executed, as the simple help screen shows, as follows.

The output of the script shows how “git filter-branch” processes all commits and creates an alternative history. Additional to the “HEAD” and “master” reference, the original history is referenced via “refs/original/refs/remotes/origin/master” and “refs/original/refs/heads/master”. This can be considered as a backup of the old history.

The above “git for-each-ref” will print all refs matching “refs/original” in the repository (those which reference the old history) with the “delete” command prefixed. This command is then piped to “git update-refs” command which will delete any reference to the old history.

The same procedure to update the clone of the repository can be used as described in Remove files from git history.

In some cases, rewriting the history of the repository fails. If there was already in the past an operation to alter the history, the above mentioned backup references might still exist and cause the following error message.

Either cleanup the repository as explained in the procedure after rewriting the history or “–force” (or “-f” for short) can be added to the “git filter-branch” command in the described script.

To avoid future commits with the wrong email or name, set them either for this specific repository or globally. The below command, when executed inside the repository directory,  specifies the author’s name and email address used to commit.

When “–global” is added to the above commands, the settings are set globally rather than just for the current repository. The globally set name and email are used as long as there is no name or email set in the repository itself.