Understand the basics of rrdtool to create a simple graph 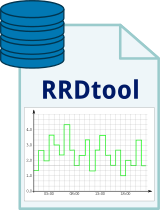 rrdtool is a powerful tool to store time series data and create graphs. It is very easy to create your first simple graph. This how-to will show the quickest way to generating your first graphs while explaining the options used.

rrdtool is used in many monitoring solutions. Its one of the easiest and best ways to store datapoints and generate graphs from them.

Before we start to generate the first graph, we need an rrd database file with data in it.

The line starting with “DS:” represents the “data set” to be stored in the database file. In short, the definition of the data set is a colon “:” separated list. After the “DS” keyword, the data set name (“ds1”) is specified (second element). The third element is the data set type which is chosen to be GAUGE for that example. A detailed description of data set can be found at rrdtool -> rrdcreate.

The specification for this is “RRA:CF:xff:step:rows”

All this explanation sounds like a lot, but in fact, this one line in the example is used to instruct rrdtool to store 100000 values in the rrd database file. The average of 1 DP actually only means to store the values as they are.

Fill the database with example data

The syntax for the rrdtool update command is very simple. rrdtool is called with the command “update” followed by the file name and the “timestamp:value” parameter containing the unix timestamp and the value to add to the rrd database file.

Starting with the most simple graph

This is the one of most simple commands to use rrdtool to create a graph. This command will use defaults for all non-specified parameters.

This rrdtool command “graph” instructs rrdtool to create a graph followed by the file name of the image. The parameter “–start” and “–end” define the start and end time for the rrd graph in the same way as in the create command.

The relevant specification for the DEF line is “DEF:vname=rrdfile:ds-name:CF”.

With the data fetched from the rrd database file, rrdtool needs to be instructed what to do with this data points. There are different options to control how the data points are drawn. The example starts with a simple line.

The relevant syntax for drawing a line is “LINE[width]:value[#color][:[legend]”

With a few small changes, the graph can be changed to look different. For example, increasing the number in “LINE1” to “LINE3” and changing the color code to “#00FF00” will draw a thicker line in green.

When the “LINE1” is replaced by “AREA”, the graph does not show a line, but shades the area that would have been under the line.

This entry was posted in Monitoring and tagged create, graph, rrdtool. Bookmark the permalink.