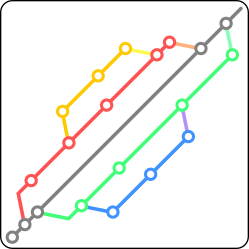 Following the philisophy of git, branching is an essential and much used part of the development procedure. When a new feature is developed or a bigger change is to be implemented, a branch is created to work on and later when the work is complete, it can be merged back to the original branch. The following will be a short introduction to creating and merging a branch with git.

The above command switches the git repository to the master branch. This will be used as the starting point for the new branch. To create a new branch named “feature_A”, the “branch” command can be used.

If run without a branch name, the “branch” command will only show a list of local branches. After executing the above command, the branch list shows two branches. The currently active branch “master” is marked with an asterisk in the branch list.

To switch to the newly created branch, use the “checkout” command again followed by the new branch name.

The following command will start the merge procedure from the source-branch “feature_A”, as specified by the argument, to the current branch “master”.

This entry was posted in Version control system and tagged branch, git, merge. Bookmark the permalink.